A Grasmoor round & wild camp : From Crummock Water


The weather forecast was about as good as it gets in the Lake District; cold but clear skies, patchy high cloud, no wind and excellent visibility. I therefore decided to head high. Last years Coledale Horseshoe route onto Grasmoor summit had provided some of the best mountian views I have ever been fortunate enough to witness & since then I had intended a wild camp up there. There were a few fells on my 'to do' list on the western side of Grasmoor so a route was devised to link them all up and off I went.


The first objective was Rannerdale Knotts. A path leads straight up from Crummock water but hold on .... it was a spring day .... in Rannerdale .... that rings a bell. Bluebells in fact, the famous Rannerdale bluebells would be out! I thought there were more cars parked on the road than expected. A minor diversion was therefore in order to have a look see. It was a worthwhile detour.

Back on track I headed up the steep path to Rannerdale Knotts. Thankfully there were lots of photo opportunities along the way to masquerade as rest stops.

Now I'm not usually a grumpy fella. I don't really like conflict and tend to let most things slip by without a word but this time I broke from my typical placid demeanor. From about 300 yards away I could hear them well before I saw them. A couple, middle aged and with accents south of the Watford Gap were sat by the summit cairn. She was 'shouting' into her phone while he was eating his lunch and loudly chirping into the conversation at frequent intervals. The cacophony was a sharp contrast to the otherwise peaceful surroundings. It was like something from a Dom Joly sketch. As I very slowly meandered towards the summit it was clear that they had no intention of moving on. I therefore wandered over and stood on the summit cairn taking my photos while receiving annoyed looks as I trod carefully around their sandwiches. As I moved off I asked him if he had ever heard of a 'summit hog'. After repeating myself in order to be heard above his wife, he said "Na Mate, a Sammit Hawg?" "Yes I said, look it up when you get home", and with that, I set off on my way. I hope he did look it up. He would have found something like this which I think sums it up well - Summit Hog. It's common courtesy to move off the summit if someone else arrives. After all, everyone wants to to get the highest point & take their photos without others being in them. Sitting on the top while having lunch and shouting is just rubbing salt in the wounds in my book. Anyway, rant over. If you want to read more of me moaning about this then I have vented my spleen here.

My mood quickly improved a further 300 yards on as I finally moved out of Mrs Summit Hog's earshot who was still barking into her phone. The ridge continued on towards the head of the Higher Rannerdale valley before climbing back up the other side towards Whiteless Pike.

At this point the numerous other walkers around Rannerdale fizzled away and the fells became quiet and secluded. By the time I reached Crag Hill it was 5pm and the few other walkers I had seen were now heading down. I had taken a leisurely 4 hours to get here and I now just had a simple stroll over to the Grasmoor summit plateau to find a suitable place to make camp.


So far it has been exceptionally dry under foot and since leaving Crummock Water I hadn't had any sight or sound of water. I was beginning worry a little as I didn't really have enough to get me through the night, at least not if I wanted a hot meal, coffee and then noodles for breakfast. Luckily I came across some standing water in a few peat hags at the shallow col between Crag Hill and Grasmoor. I filtered 2 litres with the trusty sawyer squeeze filter and made my way up onto the expanse of the Grasmoor summit plateau.

Just past the summit shelter the land dropped down to a little grassy area which was sheltered from any easterly or westerly winds whilst having great views down to Crummock Water. A perfect spot. And so at 6pm and with no other hikers in sight I made camp and settled down to watch the sunset over the Irish Sea. 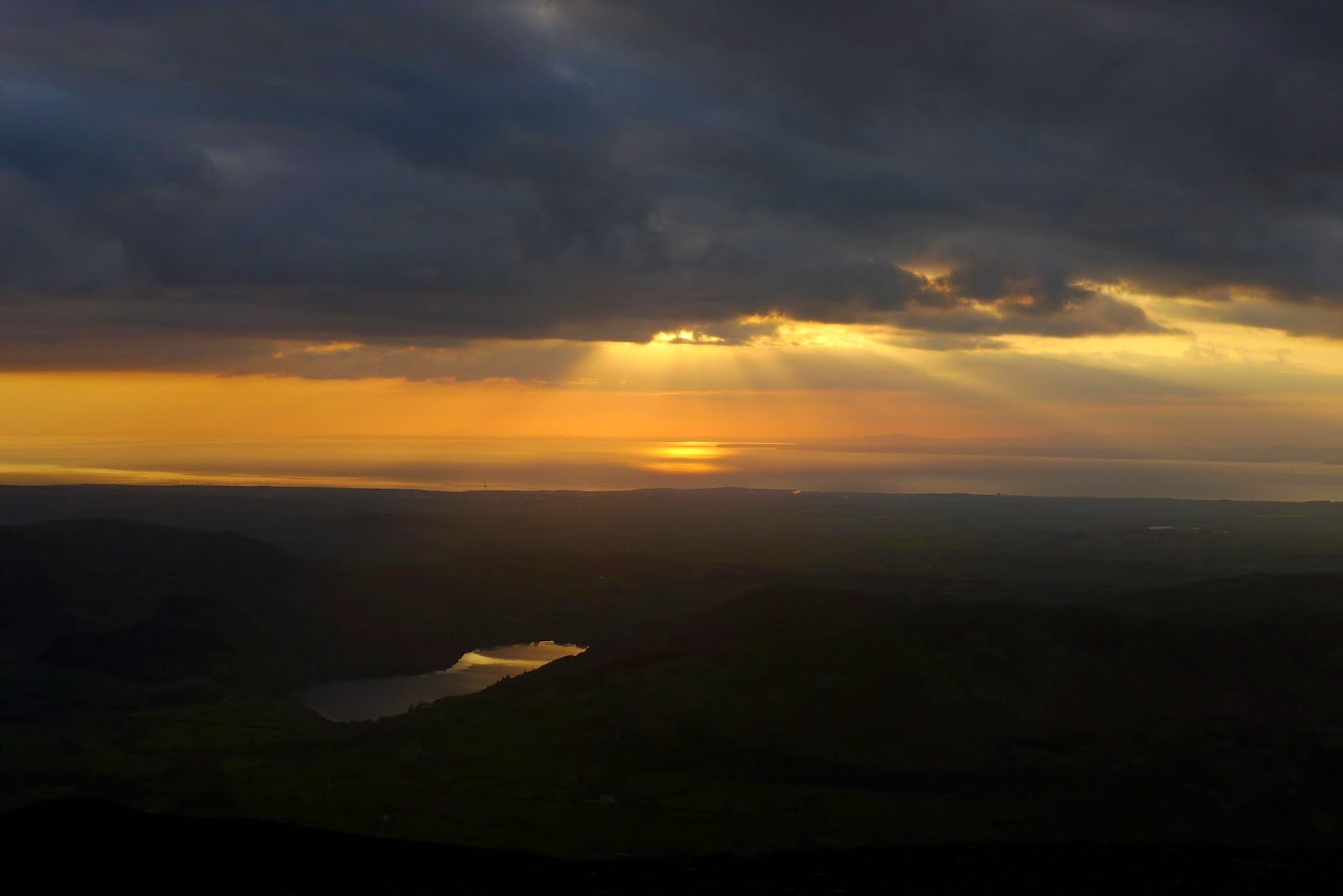 The last time I was on Grasmoor it was first light on a February morning after a camp on Sail summit. The scene as the morning sun lit the Buttermere Fells & beyond was stunning and so I was hoping for more of the same. Unfortunately it wasn't to be. I woke to a somewhat hazy & overcast scene with no chance of seeing a sunrise. Ahh well, you can't have it all. I'd been very lucky so far. Despite the disappointingly 'washed out' light, all the high fells were still in view and I headed off towards Coledale Hause well rested and with a spring in the step.

From Coledale Hause its a steady trudge up to Sand Hill and then Hopegill Head which has the lofty position of occupying the head of 4 converging ridges. It's a great vantage point.


From Hopegill Head an exhilarating ridge is followed towards Whiteside. A steep drop falls way abruptly on the left down to Gasgale Beck, over which the huge bulk of Grasmoor dominates the valley on the other side. To the right (west) are uninterrupted views to the coast and over the Solway Firth to Scotland.

From Whiteside summit onwards the terrain becomes decidedly steeper. Crummock Water looks spectacular far below & entices the eyes away from feet which is most unwise on this section. A few stumbles later I learned to pause when gazing down to the waterside 2300 feet below.

At this point I met the first of a string of hikers making the upwards journey. Most were curious as to why I was coming down (it was still only 9am) but a few spied the large pack and enquired as to where I'd camped.

Eventually the road is reached and I enjoyed a nice stroll along Crummock Water for the last mile to the car back at Rannerdale. Overall this was a great route which would also be achievable in a day and I can highly recommend it. The benign weather and the views from from Grasmoor made for the best wild camp I've had yet. So thats 4 new Wainwrights and 3 old favourites which brings the count up to 132. I'm in no hurry to complete them though. This is something to be savoured, not rushed.

I also did a video of the hike which somehow managed to end up 25 mins long. I have posted it here in case anyone wants a look but please make sure you are sat comfortably and with a strong coffee to keep you awake.