This was one of those walks where you set off with a fair idea of your route but then one thing leads to another and you end up wandering much further than planned. My intended summit today was Bowfell from old Dungeon Ghyll at the head of the Great Langdale valley. I wanted to climb it via the 'climbers traverse' route, which can be difficult to find, as I had discovered the previous year. That time I had stumbled across it, more by luck than judgement, while heading up Bowfell from Crinkle Crags. On that day the weather was poor, with rain and hill fog obscuring views. Having now researched the route more thoroughly, and with a clear forecast, I set off at 7:30am heading for 'The Band' and keeping an eye out for the point where a path veers off on the right for the climbers traverse and the extensive rocky crags of the east face of Bowfell.

Climbers traverse is a fairly well trodden path which winds it way underneath Bowfells impressive rocky scenery. It is so named as it was used by rock climbers to access Bowfell Buttress and Cambridge Crags. It is not shown on the OS map but is well described in Wainwright's Pictorial Guide: Book 4.

At the point where a spring emerges from moss covered rock on the left a subtle path can be seen cutting steeply backwards as it skirts Cambridge Crag. This is easily missed so if you find yourself passing beyond the rocky bulk of Cambridge Crag (see pictures) then you have gone too far.

The steep 'path' soon disintegrates into a boulder field but the lie of the land is easy to follow as you skirt Cambridge Crag on the right, eventually emerging onto the iconic and aptly named 'Great Slab'. This impressive rocky feature is very obvious when seen but it is probably best to stay close to the boulders on the right which is the less exposed route.

Once at the top of 'Great Slab' take a moment to ponder the magnificent view towards the Langdale Pikes and the Great Langdale Valley. This is truly one of the finest Lakeland aspects. It's then a simple case of following the rock-scape upwards until you emerge on the summit of Bowfell and are rewarded by breathtaking views of the Scafells over the Eskdale valley.

Anyone familiar with Bowfell will be aware of its local microclimate. If there is a cloud to be seen, it will usually make a beeline for the summit while often leaving other nearby peaks untouched. This typically changeable weather was no different today. In the 20 minutes I sat there enjoying coffee & flapjack the clouds descended obscuring all views, it then snowed briefly before the cloud lifted and the sun came out.

From this point I had intended to either tackle the Crinkles, or go the other way to Esk Pike and back via Rossett Pike. However, as I gazed across to Scafell Pike and eyeballed the route back along the ridge to Great End, Esk Hause, Esk Pike and back to where I was now stood, this seemed like such an inviting objective. A quick look at the map confirmed good paths all the way and it didn't seem 'too' far. Decision made, I set off at a quick pace, mindful of the distance and rocky terrain despite the illusion of an easy jaunt. It is a straight forward path along the broad ridge to Esk Pike with great views in all directions but particularly forwards to Great Gable and left to the Scafell range. 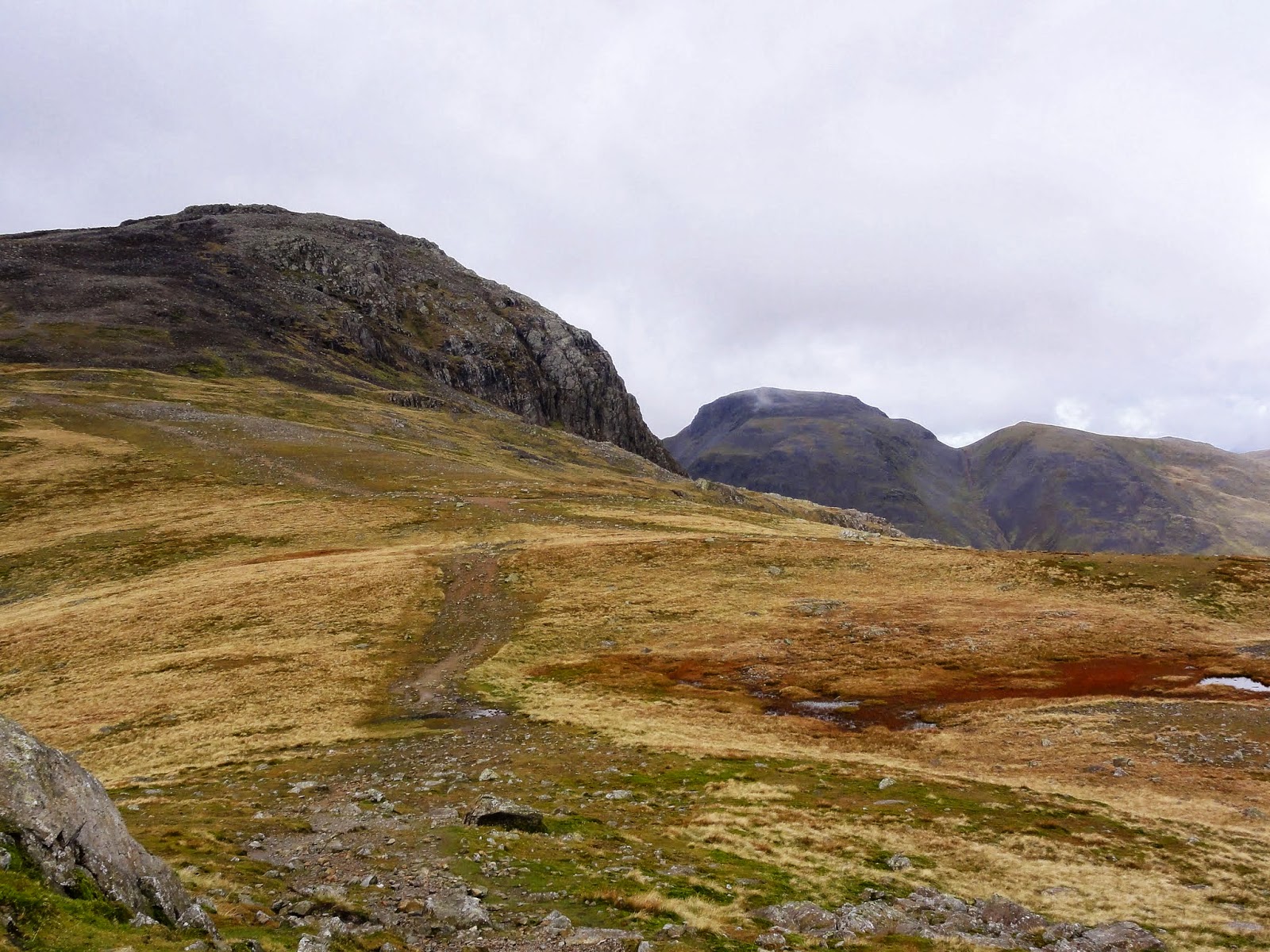 By the time I reached Esk Hause the weather had continued to improve and I was making good time. I followed the path upwards to gain the Scafell ridge and then continued on to Ill Crag.

Scafell Pike didn't seem to be getting any closer but I continued on along increasingly rocky terrain until the final steep ascent emerged onto the summit plateau. There was one other hiker at the top but he headed off as I arrived and I had the summit of England's highest all to myself for a precious 10 minutes before others emerged from the Wasdale side.

I headed back along my tracks making a short diversion to Broad Crag before retreading my steps back along the ridge towards Great End. When I reached the point labelled 'Bield' on the map where the main path descends back to Esk Hause, I decided it would be foolish to walk past Great End and so headed up along an easy path to its summit. It was a worthwhile detour as the views in all directions were stunning.

I then walked back down to 'Bield' to rejoin the path to Esk Hause before bearing eastwards towards Angle Tarn. From this area there are stunning views over to the Langdale Pikes. There is something special about looking down onto these iconic fells from higher ground and I think this vantage point showcases the 'Pikes' from their very best aspect.

The last fell of the day is Rossett Pike, which although the least in altitude, commands a superb vantage point at the head of the Great Langdale valley.

On the descent from Rossett Pike the impressive rock scenery of Bowfells eastern face demands increasing attention. My earlier ascent path along climbers traverse and up to Great Slab becomes clearly visible.

From here the path descends steeply down Rossett Gill to eventually emerge at Mickleden under the dominating bulk of Pike of Stickle which by now was bathed in late afternoon sunlight.

The legs were feeling tired now and it was a weary but thoroughly satisfied plod back along the Cumbria way to the car parked by Old Dungeon Ghyll. This was about as far (and high) as I would want to walk in a day but it was a route which had everything that I love about day hiking in the Lake District; impressive rock & crag scenery, a bit of scrambling, majestic peaks, quiet tarns and stunning views. What's not to like ?

This walk takes in 6 out of the 7 Wainwright fells in the Coniston region and could easily be extended in order to include the missing one (Dow Crag). The walk starts in Coniston village and heads off up the old miners track. It is the tourist route up but is never-the-less full of interest and pleasing scenery. The weather started with low cloud obscuring the fell tops but it did eventually lift for the latter half of the walk.

Despite the poor weather there was still a welcoming party at the summit who were sat around the cairn eating their sandwiches. This disappointingly familiar scene of summit hogging is unfortunately a common occurrence on popular Lakeland fells. I moved on, taking the straight path towards Brim Fell before bearing west 'off path' towards Grey Friar.


It started raining on the way up to Grey Friar and the swirling cloud made for some dramatic scenery as surrounding fells came into and out of view.


On Grey Friar summit the cloud descended again and despite stopping for lunch in the hope of glimpsing some views, it was not to be. I headed back and then onwards to Great Carrs, passing the wreckage and memorial for the Halifax Bomber which crashed in 1944 with the tragic loss of all 8 crew members. 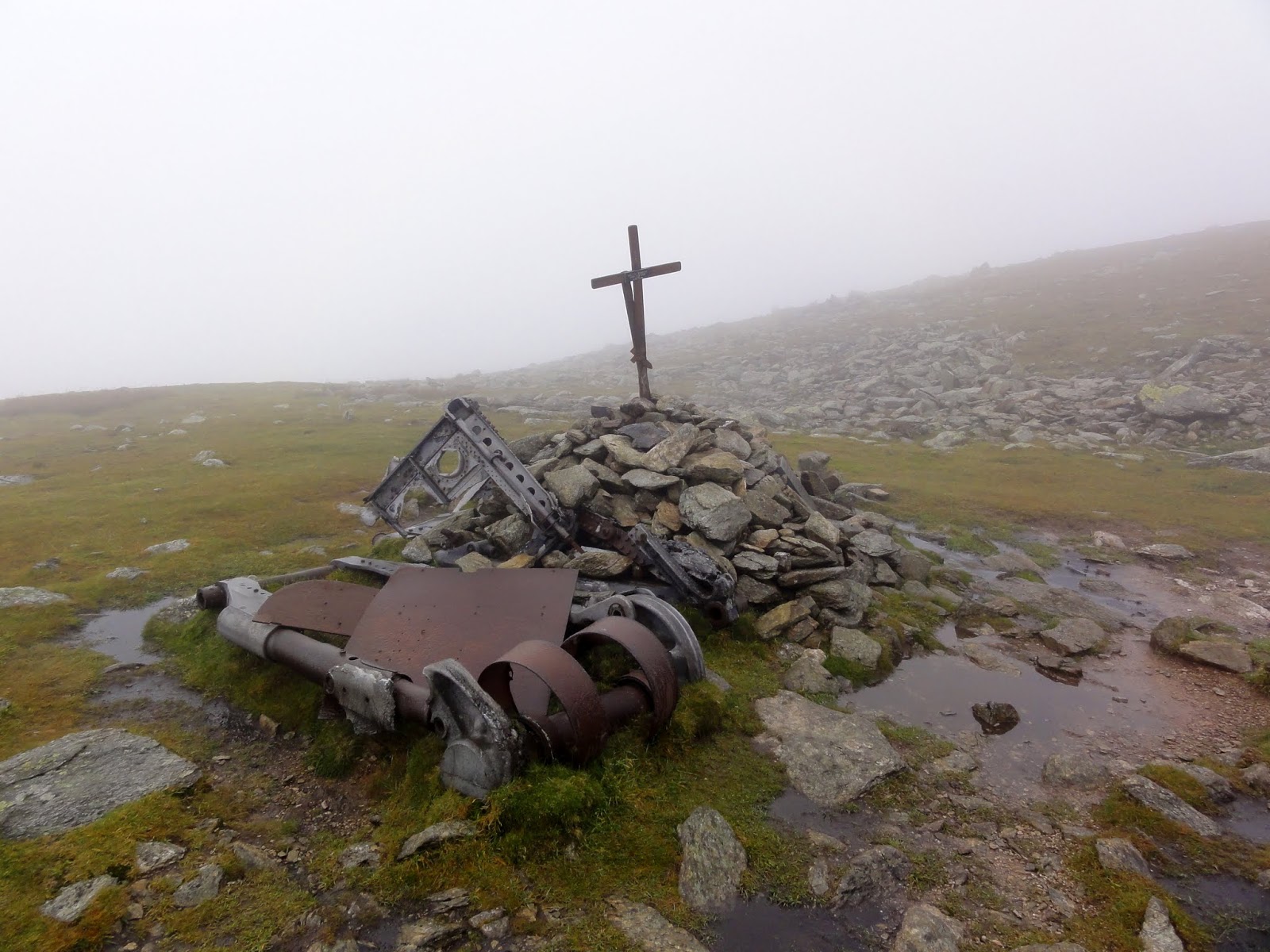 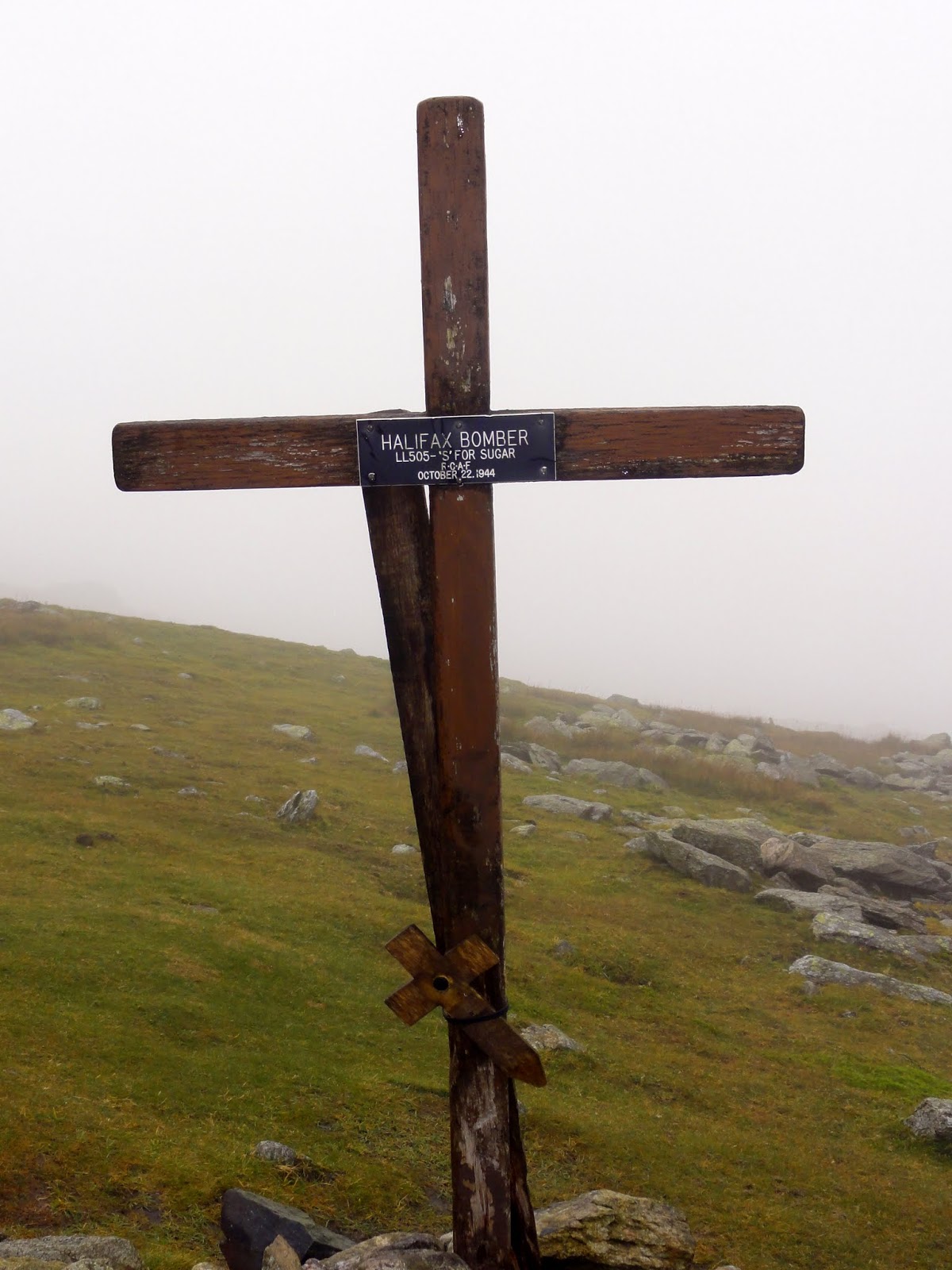 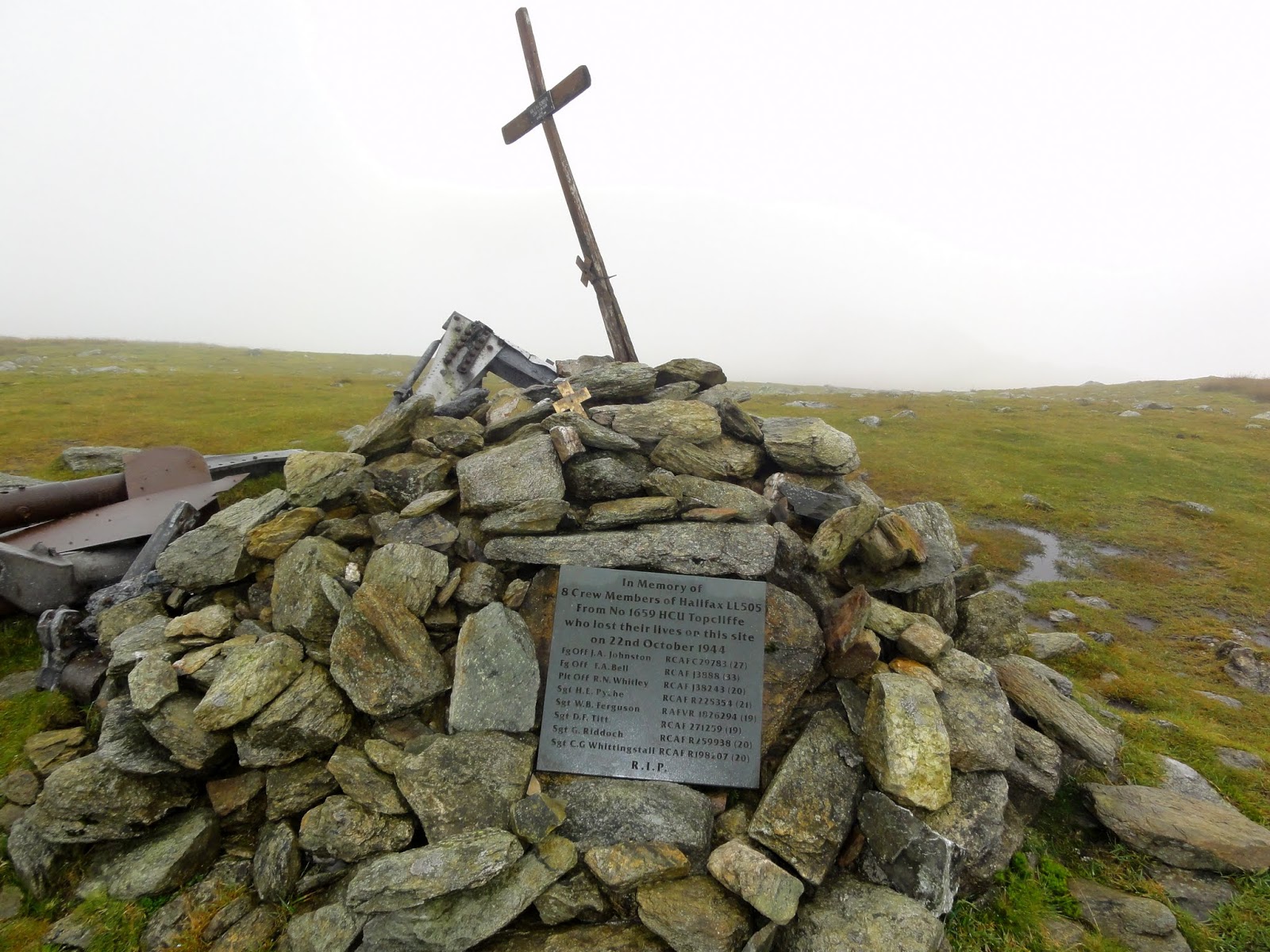 I continued on up to Great Carrs summit by which time the clouds were thinning and it had stopped raining. My route then continued on to Swirl How and then Wetherlam via the strangely named 'Prison Band' path.

The views from Wetherlam summit were the best I'd seen all day and I lingered for 1/2 hour enjoying the panorama before reluctantly heading back.

As I drove past Windermere the sun was setting over the Coniston Fells and I just had to pull over and admire the view for a few minutes before heading home.