Video of the walk

It had been ages since I was last in the fells. Five months in fact. The main reasons were 1) getting a new job 2) having a child who needs driving to football-lots 3) bad weather whenever I planned a trip. Anyway, it was time make amends. My 9 year old was keen to get out for a hiking adventure and I had promised to take him up Bowfell. Stories of steep crags, exposed routes and stunning views had whetted his appetite and there was also the chance of some snow high up which added to the excitement.

We parked up near the Old Dungeon Ghyll and headed off through Stool End Farm and up the Band. Patches of snow were visible higher up but the summit of Bowfell remained elusively under cloud. As he had managed Blencathra with ease in the summer I thought that the climbers traverse / great slab route would be good challenge for him, especially if there was a bit of snow around. However, as we didn't have axe's & spikes I was prepared to turn back or change routes if needed (I had checked the various web cams, weather forecasts and blogs and was satisfied that any snow/ice would be patchy and avoidable).

We headed up the Band until leaving the main path to access climbers traverse (a detailed description of how to find the route is described here). At this point we encountered the first few patches of snow which the boy promptly jumped in, got his gloves soaking wet and his hands cold. No problem though. I has prepared for such eventualities and had a rucksack full of spare warm stuff. So on went the waterproof mitts and the conversation turned to famous mountaineers and epic alpine adventures. Before long his imagination was fired and we were embarking on the first ascent of the Eiger. He had great fun climbing up a steepish patch of snow using 2 poles and plenty of grit and determination. He felt like a real mountaineer and I was happy that the slope gradually levelled out at the bottom where there were no rocks to slide into if he slipped.


Having successfully conquered the Eiger we returned to Bowfell and made our way towards the climbers traverse. It was great to take my son along this narrow route which winds its way amongst some of Lakelands most spectacular rock scenery. The presence of a few snow patches added to the adventure. 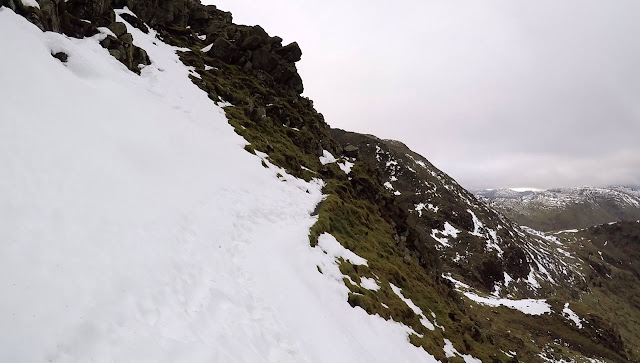 A hyperlapse video of climbers traverse


We stopped for a well earned rest and a bite to eat by the water spout at the bottom of Cambridge Crag before heading off for the final push up the steep boulder field by the famous Great Slab.

From the top of Great Slab its just a short amble to the shattered summit of Bowfell. Unfortunately there were no views today so we didn't linger. Instead we headed quickly off towards Esk Pike but then got distracted by more large snow fields which just had to be walked over, slid down and jumped in.

By the time we had finished playing around it was clear that we wouldn't have enough daylight left to climb over Esk Pike and come back via Esk Hause as originally planned. Instead we took a short cut down to Angle Tarn at Ore Gap where even more large snow fields distracted us into further fun and frolics. By the time we bagged Rossett Pike and got down the Rossett Gill path it was going dark. Head torches were deployed for that last mile along the Cumbria Way back to the car. This made for a last bit of excitement before the end of a perfect lad & dad adventure.

Next on the adventure radar .... The Matterhorn!

So my 9 year old lad had decided to sleep rough for the night in aid of Den Day, a 'save the children' initiative aimed at raising awareness for children in the world who don't have a safe place to sleep at night. The idea is to sleep in a home-made den in the garden or perhaps on the bedroom floor if the weather is poor. We thought we could do better though. I had planned to take Noah wild camping this year anyway and this seemed like a great opportunity to combine the two ventures. Admittedly, I had imagined a slightly less challenging project for his first wild camp but we decided to be ambitious and aim to build the highest den in the UK for national den day. Blencathra, at 2848 feet, seemed like a good choice as it is a superb mountain with amazing views and importantly, plenty of flat grassy areas on the summit for camping.
Click or zoom on the map below for route details

Thankfully the weather forecast was favourable over the national den day weekend so we left for Blencathra in a buoyant mood. We set off from Scales at 3:30pm along the bracken lined path rising up onto Scales Fell. I had given Noah a trekking pole, a full rucksack and a packet of jelly babies so he looked like a real wild camper.

The first part of the hike is quite steep so we had plenty of short rests. When the path eventually emerges onto the main ridge of Scales Fell it flattens out and the view opens up on all sides.


The final push to the summit was a bit of a struggle for the boy as his rucksack was proving to be uncomfortable. Between us we carried it carrier bag style to the top.


We got to the summit at 6:30pm. Visibility was excellent. It was cold and a bit breezy but we had great views in all directions.
It was now time to find a place to make camp (or rather, build our den). There is no shortage of flat grassy areas on Blencathra summit and so I let Noah choose a suitable spot. He thought we should make our den right by the little tarn in the middle of the summit plateau. That was fine by me as it was an ideal water source. He set about exploring the tarn while I set the tarp up. He then helped with some final den adjustments, such as the important job of attaching the official den day flag. In next to no time we were unpacked, wrapped up in sleeping bags, had the stove lit and tea on the go.


I'd brought a small selection of foods for our evening meal. Noah chose super-noodles from the menu and I had meatballs and pasta. The phone provided our entertainment for the evening. We played pool and hangman and then watched Mrs Doubtfire together. He was asleep before it finished. It was a cold night (6 degrees C) but thankfully the wind died down. We both slept with woolly hats on.

The strangest part of the night was being woken up at around 2am by the sound of voices outside. I poked my head out of the 'door' to see about 20 head torches making their way towards us. A strange conversation then followed - started by "Hey look, a tent! - Is it cosy in there?", to which I replied "Yes thanks, are you fell running?". "Yes" someone answered "We're on the Bob Grahame round". "Ah OK" I replied "Enjoy yourselves!". "You too" they said, and off they went. I had forgotten that this was the closest weekend to the longest day and so was a popular time to tackle this famous 24 hour Lakeland challenge.


We woke up to a cold and claggy morning. I left Noah watching the end of Mrs Doubtfire in his sleeping bag while I packed everything up. I then got him up and dressed and told him to keep moving around so as to stay warm. I then quickly packed up his mat and bag and then the shelter. A few minutes later the rucksack was packed and we were ready to go. Right, where was Noah? I couldn't see him. Panic set in. Visibility was about 100 feet and I knew that there was a steep drop down to Scales Tarn about 300 feet to the east. "Noah!" I shouted .... No reply. "Noaahhh!" ... still no reply. "NOOAAH!" ..... "What?" says a calm but perplexed 9 year old emerging from the mist. "Are you OK dad?" ..... Bleedin kids!!

After a short lecture on the dangers of wandering out of sight in these conditions, we picked our way carefully down the steep path towards Scales Tarn. It wasn't long before we got below the cloud base.

We soon warmed up once below the cloud. The sun even came out.


Overall our little adventure was a roaring success. Noah raised over £500 for save the children and had a great time doing so. It was a tough challenge for him but he really enjoyed the experience and is keen to go wild camping again with his old man. Result!