I have new Gear !! First look at the As Tucas Down Quilt

The inherent design flaw with down sleeping bags is that all the insulation underneath you is compressed by your body weight to a degree where it loses all thermal efficiency. This squashed down is essentially dead weight. The idea behind a quilt is to eliminate this dead weight and instead use the insulating properties of the mat to protect you from the cold ground.

This idea was popularised by legendary America backpacker Ray Jardine and has since become become very popular, particularly within the lightweight backpacking community in the States.

This short video from 'standing bear' explains the concept a little better than I can.

Personally I've never really got on with mummy sleeping bags. Not so much for the reasons above but more because I'm a fidgety sleeper.  I tend to roll over a lot, throw arms and legs out all over the place and generally not stay in one position for long. As such, I'm forever twisting and turning; trying to move the zip, that was in the perfect position 10 minutes ago, out from underneath me. Or I'm straining the fabric trying to stretch out a knee or an elbow. I'm very envious of those lucky folk who can sleep on their backs without moving from dusk til dawn.

Quilts are therefore an attractive proposition to me, and after doing a bit a reading around the subject, I bit the bullet and ordered a custom down quilt from Marco at As Tucas. It arrived a few days ago and I thought it would be worth posting a few pics, a few stats and a few thoughts. 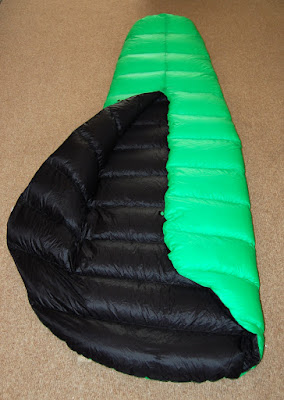 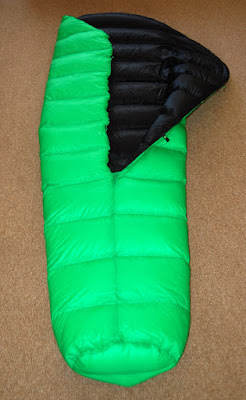 As Tucas offer an increasing number of ultralight outdoor products but they also offer a custom made service. I therefore emailed Marco with my quilt requirements; namely that I like a bit of wriggle room, that I'm 5' 10" and I would like it keep me warm down to about freezing point. He suggested a custom made sestrels quilt with 350g down in size medium length and regular width. The sestrels quilt in its usual form is synthetic and the details can be found here. I understand that Marco will be selling the 'Foratata' down quilt from July 15th, which is almost identical to this one.

On initial inspection the quality of workmanship is superb. There really isn't a stitch out of place. The quilt is simplicity itself with a roomy enclosed foot box and a open back which can be closed up by fastening 2 press studs.

This particular quilt uses 350g of pure white 900 cuin down sourced from Poland. It has an estimated comfort rating of 0 degrees C. The fabric is Schoeller 12 denier which is 28g/m2. It is windproof and breathable. It has an 'ecorepel' coating which provides resistance against water and dirt. Full details can be found here.

Marco tells me that the internal baffles are made from cuben fibre and their height is 25mm.They are sized so that the down is slightly compressed within the chambers. This allows for better control of down movement without a loss of thermal efficiency.


As Tucas design their quilts to be a bit wider and longer than the typical equivalent from American makers. This is so the quilt can be pulled up over your neck and head when the temperature drops without necessarily having to use a hat or balaclava. Also, it is not adorned with complex fastenings to secure it to a mat. You simply use it like you would a normal quilt at home and tuck it under your sides as needed in order to keep out the droughts. It certainly seems very comfy on my lounge floor with plenty of room to cover my head. 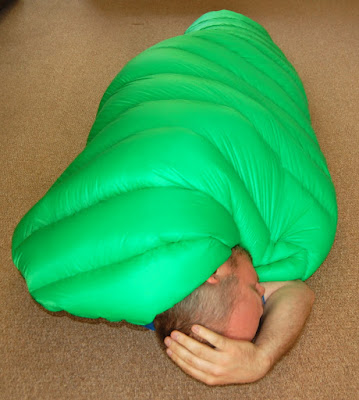 There is also the option of putting the mat inside the quilt. This is not something I can imagine doing but a few people have asked if it is possible and the answer is 'yes'. With the thermarest and me inside its a bit of squeeze with the poppers fastened and is essentially a wide mummy bag in this configuration. There is adequate room with the poppers unfastened though, and the quilt just tucked under mat. However, I don't like this idea and I will be using it on top of the mat and tucking the quilt underneath me as it is designed to do.


The one thing I'm not sure of is what to wear whilst in it? In a sleeping bag I usually use a liner bag to protect the down from my general sweat and grime but of course that would kind of defeat the object of using a quilt. I think perhaps a very lightweight base layer top and bottoms will do the job. Perhaps something like these from Rohan. Any other suggestions welcome :-)

I intend to use the quilt for 3 season use in the Cumbrian mountains, the first trip being described here - 'first night in the as tucas down quilt'. I will post an update as to its performance in the field later in the year.

I should also make it clear that I have no affiliation with As Tucas or Marco personally and I paid for this quilt with my own hard earned dosh.

Mopping up the Eastern Fells

I had 3 Eastern Fells left to climb; Arnison Crag and Birks (simple enough), and then Catstye Cam (another 2 valleys away). It was going to take a long walk to link them all up. After parting with £4.50 to park at the Patterdale Hotel I headed up the steep path to Arnison Crag. My lack of fell time this year became obvious within about 20 minutes and I quickly realised it was going to be a long, tough day.


From Birks I could see that St Sunday Crag was moving in and out of cloud but all the high fells around Helvellyn were fully shrouded. When I got up onto St Sunday Crag it was under cloud and there was a fierce wind. I headed over to a sheltered spot overlooking the Deepdale valley for a bite to eat and to wait and see if the summit cleared. The last time I was up here visibility was appalling and so I wasn't about to give up too easily. Luckily patience paid off and I was rewarded with a few fleeting views over both neighbouring valleys although all the higher fells remained under cloud. Satisfied, I headed off to Grisedale Tarn.


The path from Grisedale Tarn up onto Dollywagon Pike is a zig-zag upwards slog and it was near the top of this path that the cloud base was reached and visibility reduced to about 50 feet. After small deviations from the main path to bag Dollywagon and Nethermost Pikes I headed on up to Helvellyn. It was not pleasant up there. The wind was a steady 30mph and bitingly cold with occasional drizzle thrown in for good measure. It felt like November rather than June.


I carefully picked my way down onto Swirral edge with the wind showing no mercy. This was new territory for me and the ridge demanded full concentration. It is the equal of striding edge but seemed a lot shorter, but that could be deceiving as I could see nothing further than about 20 feet. I headed off up the short climb onto Catstye Cam but didn't linger as it was obvious that views would not be forthcoming and the wind was relentless.

It was here that I made my mistake. Without checking the compass I followed the only obvious path down in the opposite direction to the one I came up. I inadvertently took the northern path down towards the steep northeast ridge. The path I intended to take was southeast from the summit and I obviously didn't notice it. It was only when I got under the cloud that I realised my mistake. I tried to skirt around the mountain to pick up the correct path but the crags soon became too steep and so I carefully picked my way down the rocky terrain. Ah well. It made for an interesting detour which my knees just managed to survive. It also added a good hour to an already long walk.

It was a weary hiker that plodded back to the car 9 hours after leaving. That was about the limit of my capabilities for a day hike. It will be a nice, easy stroll next time ....